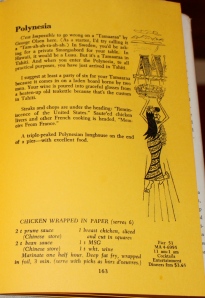 So this was our hors d’oeuvres this evening.  Tom had purchased the sauces from the grocery store.  I skipped the MSG once again and used a purchased organic chicken breast.  I deep-fried it in rendered lard from our pigs.  Here it is all cooked up with red plum wine (the first bottle from our December bottling). 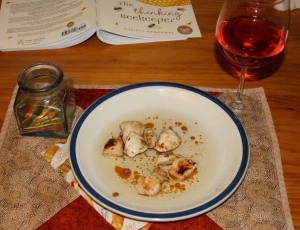 This was good but not great.  Not very flavorful but kind of fun to eat.  Not sure I will make it again, but Tom did give it a thumbs up.

Check out the information and photos about the Polynesia at http://www.tikiroom.com/.  Look at the photos of the cocktails on the bottom of page 2 and the top of page 3- quite exotic.  Check out the drinks menu too- funny!  The chicken wrapped in paper is actually listed on one of the menus.  This seems like a fun place.  if anyone went there, please let me know about your memories of the place.  Unfortunately it had a very sad demise, possibly the worst of this blog.

So this is the last recipe of the two books and the end of the blog.  It has been more than 6 months and 65 posts.  It has been a cooking and eating adventure as well as an exploration of Seattle restaurant history.  Thanks for following along. 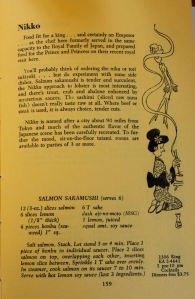 This was my dinner tonight.  I used Nori seaweed, Sockeye salmon and lemon slices in a 1/3 recipe.  I skipped the MSG.  Here it is steamer under the new stove fan we installed today (that I got as a birthday present).

Here it is after steaming with spaghetti squash on the side and the lemon soy sauce. 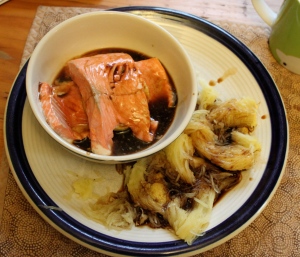 It was quite good.  The salmon was tender and tasty.  It was a little salty for me.  The squash was a good side for it.

As for Nikko, I found a photo of it at http://digitalcollections.lib.washington.edu and a description at http://community.seattletimes.nwsource.com. 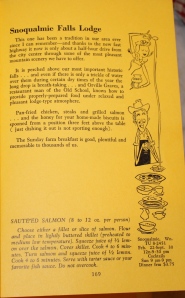 Tom made this for me for my dinner last night.  I had a long shift at work and was not feeling well so he spoiled me with this and a fresh fruit salad for desert.  He had bought the sockeye salmon fillet fresh at the store for me (and some halibut for himself).  It was a quick and easy recipe to make, and here it is on my plate with some steamed asparagus. 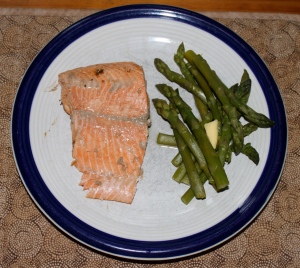 Surprisingly, I do not ever remember eating at the Snoqualmie Falls Lodge (now the Salish Lodge).  I have certainly visited the falls but not the restaurant.  That will have to go on the bucket list too.  I found on their breakfast menu “The Salish Lodge Country Breakfast enjoyed since 1916 featuring the iconic Honey from Heaven service where honey from our own hives is poured from high above your plate”.  So they still serve honey the same way.  The best history of the lodge I could find was at http://wikipedia.org/wiki/Snoqualmie_Falls 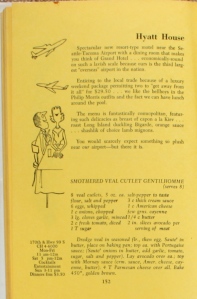 This was our dinner tonight.  I used our bull’s cubed steaks instead of veal.  I skipped the sugar.  I used a cream sauce recipe from http://southernfood.about.com/  It took a while to make two sauces from scratch.  Here it is all cooked up: 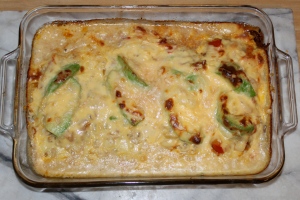 And here it is on my plate with some steamed asparagus: 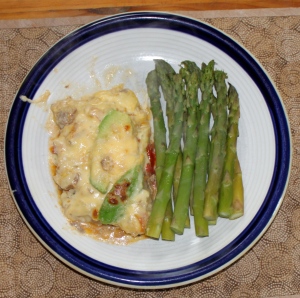 The sauces were good as was the avocado (surprisingly).  The meat was a little tough, but that is our bull’s and not the recipe’s fault.  Overall it was good, but a lot of work so not sure I will make it again.

I did find some information on the Hyatt House at http://www.seattlepi.com/  It sounds like quite the place.  Too bad they had to tear it down.  I wonder if some of those stars ate this dish there. 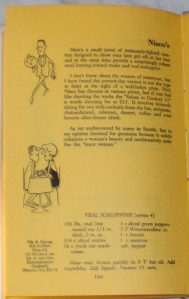 I made this for dinner last night.  We used a London Broil from our bull.  I used the mushrooms whole so they would be easier for Tom to avoid them.  I skipped the Accent (MSG).  I used Vermouth instead of Sauterne.  I prepared this while sipping on an Old Fashioned (probably the best part of the meal). 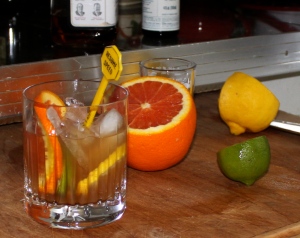 Here it is cooking: 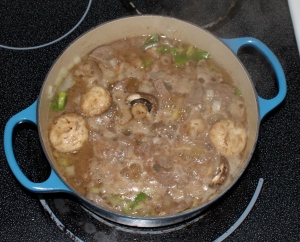 And here is Tom’s served in a bowl (no mushrooms): 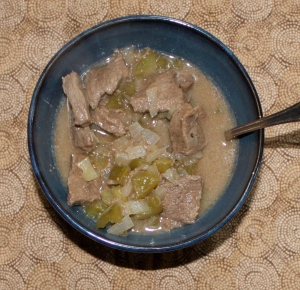 The meat was a little tough.  Tom liked the flavor.  I thought it was kind of boring.  Not sure we will be making this one again.

I could not find anything on google about this restaurant.  It seems to have disappeared into the mists. 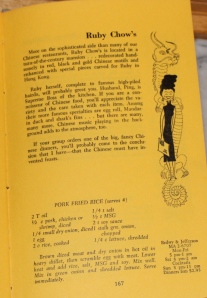 This was our dinner tonight.  I used a cut up pork chop and skipped the MSG and the lettuce.  Unlike every other recipe, this one made less than anticipated.  Here it is in a bowl ready to eat: 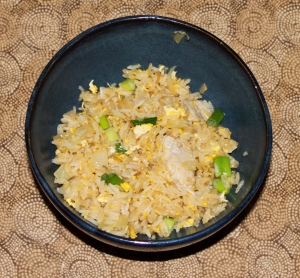 It was good, warm and mild.  Tom thought it could use more veggies in it to make it a meal.

I actually found a lot on google about Ruby Chow’s.  The best was her obituary at http://www.seattlepi.com/  She sounds like quite a character and influenced many people.  I love her hair too. 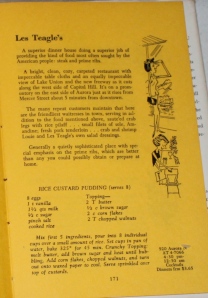 This is our dessert tonight.  I made a 1/3 recipe.  As I was limited on milk, I did add some cream.  I used pecans instead of walnuts since that is what we have.  Otherwise I followed the recipe.  Some water splashed into the puddings in getting them into the oven but apart from that everything went smoothly.  Here they are all cooked up with the topping:

Tom said this was “very good” and I agree.  I am a huge fan of rice pudding, but this one is quite different from the ones I usually have.  The rice was not mixed in with the pudding, there was a crunchy topping, and there were no raisins.   Occasionally I got a bite that was mostly rice, but it was fun having every bite be a little different.  I thought it was great and will enjoy this in the future.

I could not find much about Les Teagle’s on google.  There was information about a lawsuit again the Teagles by a woman who fell and broke her hip there that went to the Washington State Supreme Court.  I also found some obituaries of a couple of people who worked there.  Other than that, all I could find were some photos of matchbook covers on http://www.flickr.com/ 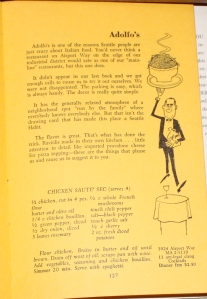 This was our dinner tonight.  I used a whole chicken of ours since it was only 2.5 pounds.  I did take the skin off and cut it into 4 pieces.  I skipped the flour but browned it in the oil and butter.  I actually included the mushrooms this time since they were whole and easily avoided by Tom.  Here it is simmering: 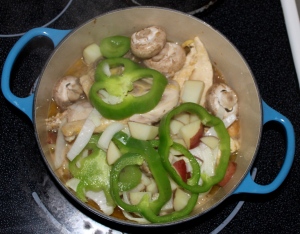 It smelled really good cooking.  And here it is on the plate with Angel Hair pasta (I had mine on spaghetti squash): 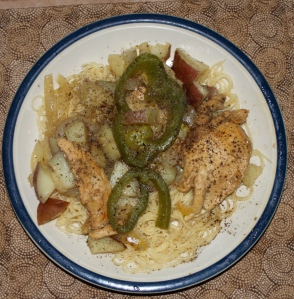 Tom said it was good but could not be more specific.  He did say I did not need to make it again.  I thought it was really good.  It was warm and comforting (much needed now) with subtle spices.

I could not find out much on google about Adolfo’s.  I did find at http://www.seattlebars.org/ that the property was bought in 1997 and eventually changed into Bogart’s which was recently closed and the property seems to be for sale.  There is an Adolfo’s Italian restaurant in West Seattle but not sure if it is the same (kind of doubt it). 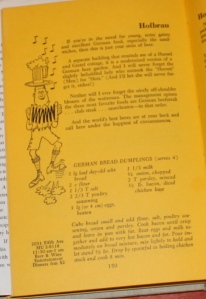 This is part of Tom’s dinner tonight.  I made a loaf of French bread in our bread machine yesterday for this recipe.  It takes a lot more than a quart of chicken broth as the dumplings soak up a lot so I had to break out the bouillon.  Some of the dumplings broke up while boiling as you can see in the lower left corner (this photo is minus 4 dumplings stilling boiling in bouillon). 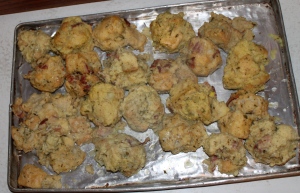 Here is Tom’s dinner with the dumplings.  I decided to make Sauerbraten to go along with it.  It was not as good this time as last time, not sure why.  Tom said the dumplings were good and spicy, but he could only eat one.  He said not to make them again for a while. 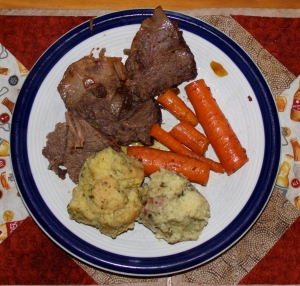 I found a very amusing photo of the Hofbrau restaurant at http://content.lib.washington.edu/  One of our favorite restaurants is the Berlin Inn in Portland.  Maybe we need to find a good German restaurant closer to home?

I made and we ate this dinner while worrying about the folks along the Stillaguamish River.  We sure hope that they will be OK! 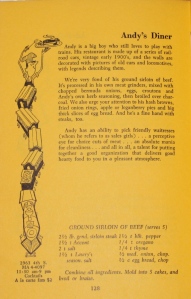 This was Tom’s dinner tonight.  We purchased Lawry’s seasoning salt just for this recipe.  I did not use the Accent (MSG) and used Dave’s cracked wheat bread instead of egg bread.  Here it is with leftover noodles and asparagus. 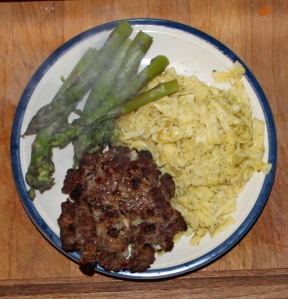 Tom said it was better than a regular hamburger, more spicy, and I can make it again.  It was a little salty though.

My grandparents used to go to Andy’s on special occasions and when I came along I got to go too.  I used to get Filet Mignon, pretty fancy for a kid huh?  Well, Andy’s is no more (it is now a Chinese restaurant with karaoke).  But I did inherit the stir sticks from my grandparents from Andy’s.  Great memories. 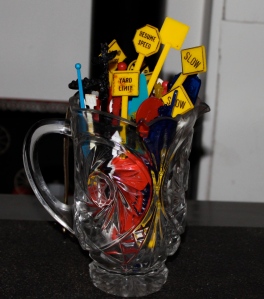